“Across the USA I have photographed with these ideas in mind: to portray Americans as they live at present. Their every day and their Sunday, their realism and their dream. The look of their cities, towns and highways”  — Robert Frank, application for renewal of Guggenheim Fellowship, 1956

The modern American road trip began to take shape in the late 1930s and into the 1940s, ushering in an era of a nation on the move.  After 1945, postwar prosperity, mass consumption, paid vacation leaves, the development of new highways, followed by the interstate highway system, combined with the rapid growth of automobile ownership resulted in a growing number of family vacations on the road.  Families traveled across the country, or at least out of state, to vacation, visit relatives or old friends in an increasingly mobile society.  Road trips became a chance for children to learn about America – its’ big and diverse landscape, its’ history, national parks and monuments.  Travel by car also created businesses to cater to Americans on the road, such as: gas stations; motels; campgrounds; diners; amusement parks and gift shops. The “road trip” was something uniquely American.

Photographs of the vacations filled family photo albums.  Photography also gave us postcards to share these family adventures. The American road trip was the subject and incubator for literature, music, film and photography.  It came to represent a sense of possibility and freedom, discovery and escape – a place to get lost and a way to find yourself.  For the arts, road trips represented both a way to discover the nation and to illuminate who and what we are.  The American Road trip became a staple of American photography as photographers sought to portray and/or better understand the vast land and the people in it – photographs were a way to look at, capture and show America’s character.

There are famous prints and photography books of personal travel, landscapes and landmarks. Robert Frank’s The Americans examined and critiqued America through images that challenged and found beauty in simple and often overlooked corners of the country.  Walker Evan’s documented and distilled America to its essence using cultural artifacts and Americans in their social context in his book American photographs. Stephen Shore found beauty in the mundane and explored the changing culture of America.  He documented everything from fast food meals to Cadillac cars, diners to dive bars, billboards to dashboards.  He and William Eggleston created a visual encyclopedia in color of what we consider modern America. Danny Lyon’s body of work on the Bikeriders speaks to the freedom of the open road while also documenting groups on the fringe of society.

Photographers have pursued that great American road trip with purpose of nostalgia, social commentary and to explore the perspectives about the truth of the nation — its values and the lives lived in the context of the “American Dream.” The road trips by photographers, as David Campany notes, force us to “confront the clichés in our heads and the clichés out there in order to bring a new perspective to both the past and present.”

“What should happen at the end of a road trip? A return to the status quo? A revolutionary new beginning? A few minor adjustments to one’s outlook? Obviously, it is not enough to drive West and arrive in the Promised Land” —David Campany, “A Short History of the Long Road” 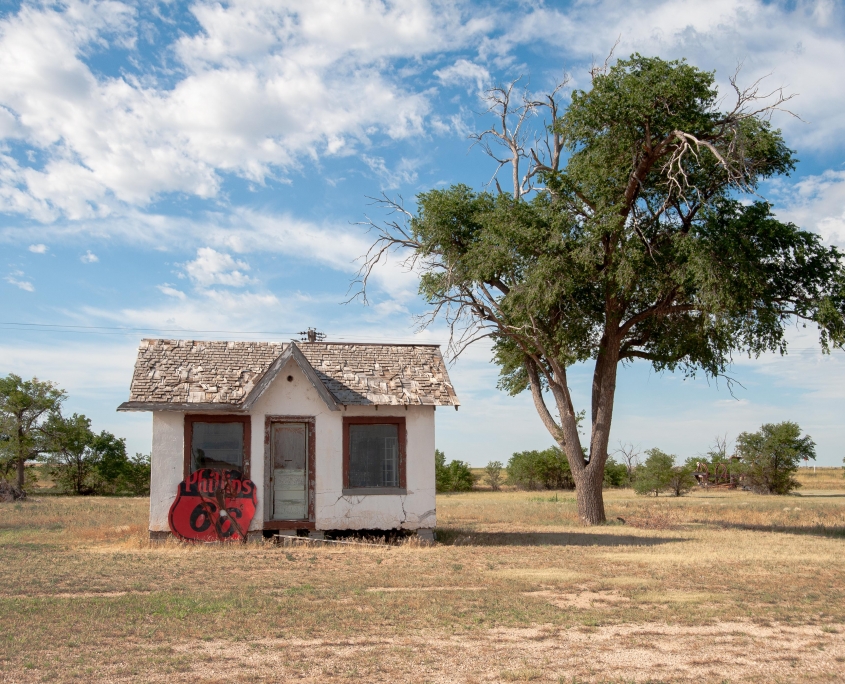 A simple spot by the road

Usually, at this time of the year I am on the road and off to visit Santa Fe. The pandemic has screwed that up for me this year.  On the other hand, there is speculation that as we emerge from the pandemic, road trips may, at least for a while, be the kind of vacations Americans seek out again. As I looked at some road trip images, it occurred to me you can’t do a road trip without gasoline.  We often take gas stations for granted.  They are like a utility; we don’t think about them. In fact, gas stations represent and underpin America’s mobility and car culture. As part of exploring the roots of political, economic and social histories, I learned that gas stations speak to elements of architectural design through the years, pop culture, corporate standardization/branding, changes in the economy and business.  They also are representative of changes in service for customers – from staff to fill the tank and clean your windshield to self-service; the addition of full-service garages to becoming convenience stores; offering branded maps and bathrooms to the addition of diners.

A Simple Spot, Phillips 66 in Adrian TX: The 1920s Phillips station (pictured above), originally called Knox’s was located in Vega,Texas on Route 66.  It was moved to the town of Adrian,Texas, known as the midpoint of Route 66. It apparently awaits its turn at restoration. The owners, who also own the Bent Door Cafe next door, are rumored to be thinking about turning it into a souvenir shop.

From the First Gas Station Onwards: In early 1900, gasoline was sold in open containers at pharmacies, blacksmith shops, hardware stores and other retailers looking to make a few extra dollars of profit.  The locale of the world’s first purpose-built gas station is debated.  Some suggest it was constructed in 1905 in St. Louis, Missouri.  Others point to Pittsburgh, Pennsylvania in 1913 when an architect designed a pagoda-style brick facility that was a complete drive in operation.  Unlike earlier simple curbside gasoline filling stations, this station in Pittsburgh not only served to fill cars with gasoline, it also offered free air, water, crankcase service and tire and tube installation.

For the past 100 years gas stations have occupied prime locations along main streets, suburban corners, on small town roads and highways.  They are one of America’s most commercial building types and over the years have gone through various architectural design iterations.

In the 1920s many gas stations were being built in prominent locations.  Due to local complaints, the gas station took on the look of cottages/houses, as opposed to an earlier shack look.  Tudor and English cottage designs with arched doorways and steeply pitched roofs became a common look.  The design also became a sign of growing competition.  Pure Oil favored English Cottage stations, while Standard Oil went for the Colonial revival design.  Gas stations were designed to attract attention and lure customers – all part of the corporate branding.  Over the years, the design characteristic of gas stations would change from cottages to a stylized box designs, often blending Art Moderne and international style motifs. Many of these featured glossy white exteriors and scientifically designed lighting schemes to attract attention. The box style stations also featured additional space for automobile service and repairs and expanded areas to sell batteries and other auto accessories.  These would eventually morph into full-fledged “convenience” stores.

The Business of Gas Stations: The advent of the Interstate highway network routed traffic away from the once-thriving, often family owned, gas stations, that sprinkled the countryside.  Today, many of these family owned businesses are located on secondary roads and falling into disrepair.  In 1969, there were 236,000 gas stations.  By 2016, there were 111,000 retail gas stations locations in the U.S. The number of gas stations has been declining due, in part, to increased competition, stricter environmental regulations, and shrinking gasoline profit margins

Explore Roadside America with me

More than gas stations, exploring roadside America can lead you to family owned motels, unique signs, communities, businesses and economies that have been lost to time and the changes to the world we live in.  If you want a visual trip through different parts of America, beyond the curated selection in the Website galleries, feel free to gander though some of the material I work with at the links below.  These images are the first-edits of the raw material.  You can check them out, based on locations, at these links:

You can also find my most current Roadside images, with their detailed stories, in the Roadside America Photo series on Instagram.  Click the image for the complete story line.

This post is from a recent email newsletter, if you want to sign up for future newsletters, here is the link.  Of course, if there is something that catches your eye, I can always print it and make it a small batch limited edition.  All you have to do is use the contact page information and I’ll work with you to find and print the image you love. 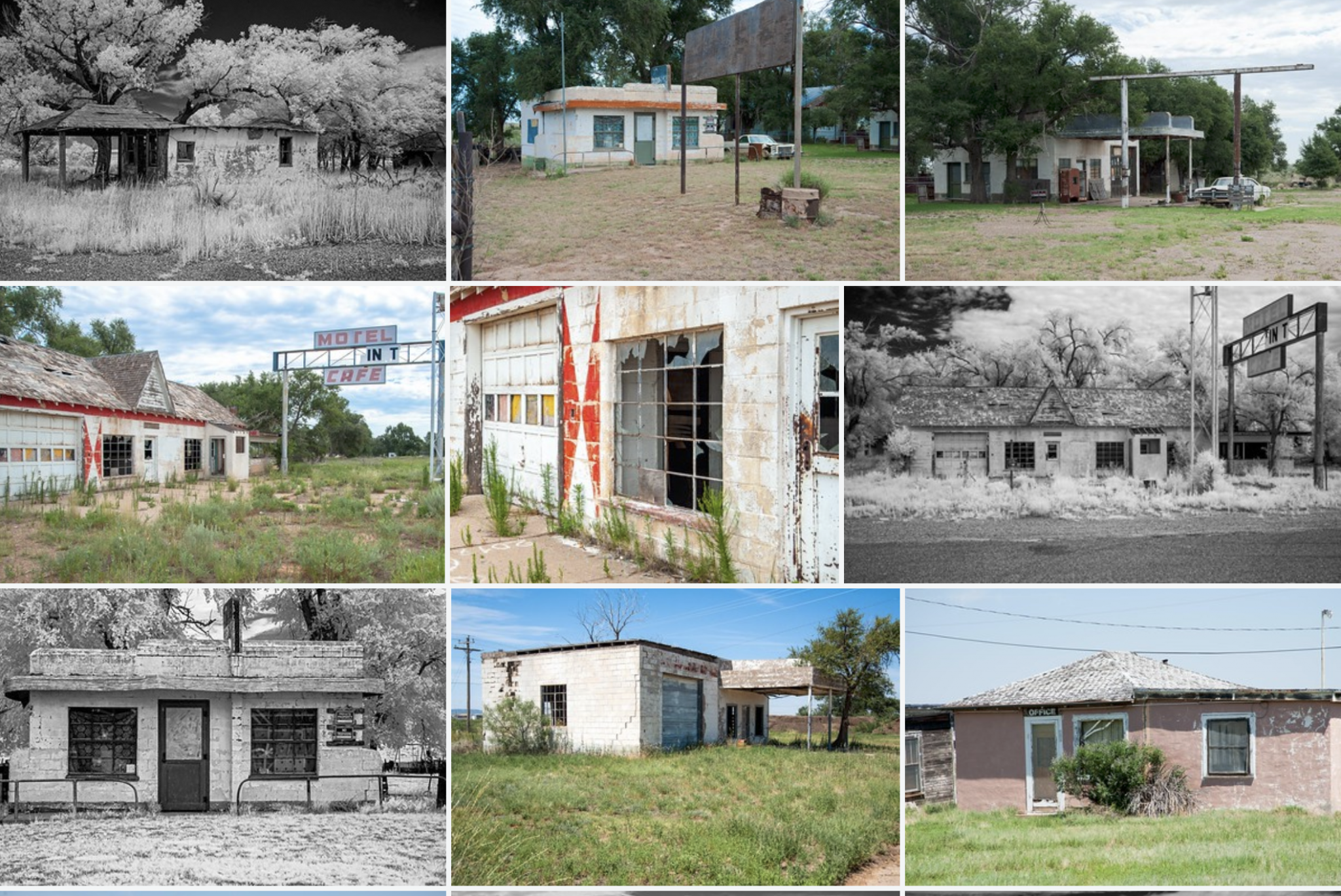 A look at some of the black and white infrared images coming out of digital processing. Images are from the recent road trip along Route 66, time in New Mexico and back through Mississippi